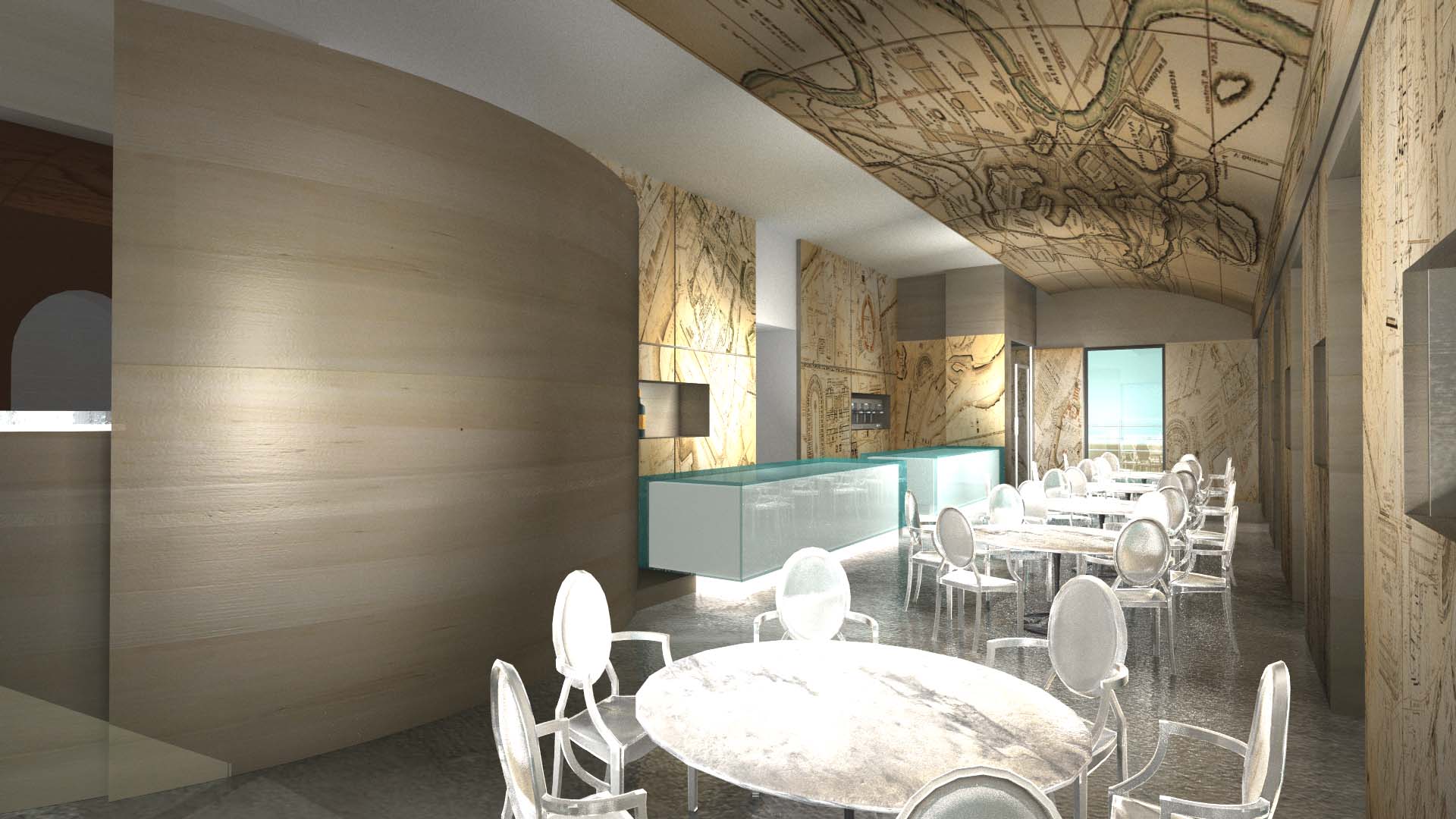 The new front treatment is based on:

a) on the principle of enhancing the transparency of the building itself, while safeguarding against excesses of introspection from the outdoor areas of the tennis courts and the swimming pool in particular, and from the direct relationship with the kitchen front.
The large perimeter windows that define the relationship between interior and exterior are therefore confirmed, flanked by a series of prismatic volumes that configure projecting and deep partitions (about 160 cm), which, covering the current pillars, project outwards, preventing introspection except from a frontal position. A roller blind, positioned inside close to the windows, also tends to regulate this last level of introspective relationship.

The windows and doors are provided in aluminum profile, with thermal break, with double glazing up to 30 mm, made mostly with fixed geometry lights, except in some segments characterized by the presence of horizontal sliding doors, to facilitate natural ventilation. in addition to that produced by the centralized air recirculation system, especially as an alternative to summer air conditioning.

b) on the redesign of the shape, focused on the redefinition of the compositional and constitutive elements of the building, and in particular, on the profile of the roof at the level of the eaves projection, and on the articulation of the base plinth.

The new shape is obtained by extending the projection of the eaves profile until it intersects a rhythmic sequence of vertical plates, characterized by a thin and elongated profile, arranged at about cm. 160 from the edge of the current plinth.

The result is a sort of continuous perimeter arcade, only partially practicable, created with the specific objective of architectural mediation between the exterior and the interior, and with different characteristics due to the three different elevations and views towards the context.

– On the front of the entrance, coming from the main avenue, the loggia contains the access ramp, inserted from the center of the external parterre and directed towards the entrance door to the restaurant.

– On the front facing the tennis court, the loggia is arranged as a break space for the planting of hedges with a specific filter function.

From the point of view of the technical realization, the projection of the eaves profile is made by inserting wing-section brackets, in laminated wood or in metal sheet, which from the existing eaves made of reinforced concrete, protrude until they find the ” support of the square section pillars (15 x 15 cm), made of laminated wood and ending with galvanized metal joints for both ground contact and connection with the edge beam of the new shelter.

The latter, on the other hand, is made with an open section that is permeable to both water and indirect light, with the intrados defined by a sequence of oblique louvers arranged like a shutter, which join the wing brackets, defining a design with a fragmented and semitransparent perception. .

The connection between the canopy and the soaring of the windows is entrusted to a vertical perimeter brushing which gives greater materiality to the general configuration.

The redesign of the external relevance is basically based on the confirmation and intensification of the pre-existing compositional setting, clearly readable by the current layout of the flooring ad opus incertum, defined by a geometric matrix with a central plan, subsequently expanded informally.

The external relevance is now conceived as a small square, clearly circular in shape, which acts as a complete space for introducing the restaurant. Accessible from the driveway connecting with the central spine of the Club, the new square is defined by a green circular perimeter consisting of a continuous hedge that intensifies the circular design. Inside there is a continuous surface flooring in ceramic coated multilayer resin, made on a special screed and contained by a curved travertine edge.

The expansion joints, made of PVC profiles with an exposed aluminum head, define the geometric design with circular sectors, present on the surface of the flooring.

The square has a total floor area of ​​approx. 200, a circumference with a linear circumference of about 50 meters and a diameter of 16 meters. From it two fundamental paths unfold, both grafted onto the geometric center of the circle. The first, bypassing the external perimeter of the restaurant, directed towards the pool area. The second, instead, directed to the entrance to the restaurant and consists of a double ramp: one without steps and the second (serving the external catering business), instead consisting of four risers.

The current flooring in irregularly sized travertine slabs will not be removed, but will form the basis for the preparation of a concrete screed, 5 cm thick positioned on a 10 x 10 metal mesh, on which the ceramic resin flooring will be spread. for outdoors.

A scenographic lighting system is provided, both for the green perimeter and

of the restaurant’s architecture, based on the principle of the new loggia intended as a box of light in which the intrados of the same functions as a diffusion reflection surface. The lighting bodies, specially concealed from direct view of people, are recessed flush with the upper surface of the plinth, close to the projecting partitions, and directed towards the intrados of the shelter.

The works essentially concern the redefinition of the internal vertical surfaces and the counter-ceiling (by means of finishing coatings in wood paneling), since from the distribution point of view the existing spaces and the glazed perimeter are confirmed.

These are organized in a hierarchical way, with two parallel longitudinal rooms, with a main room in the center of the building and a secondary room positioned with the long side on the south-east front.

The main room contains the fundamental backbone of the paths (all accesses being positioned in it, both those from the outside and those towards the toilets and the kitchen), the service and administration equipment, and the tables for food consumption .

Everything is organized according to a linear sequence dictated by the battery of the three backlit glass volumes of the service counters, which abut on the edge of the entrance door. These clearly divide the areas of competence and circulation, creating a barrier between the dining room and the kitchen-bar.

The secondary room, separated from the main room by a regular sequence of full and empty volumes, instead enjoys total immersion in the external perception of the green of the Club, having three sides out of four completely glazed.

The kitchen wall cladding paneling is made of fireproof MDF (treated with three coats of class 1 protective varnish, with a silk-screen finish reproducing the tables of Rodolfo Lanciani’s “Forma Urbis Romae”.

Similarly, the surface of the intrados of the counter-ceiling is treated, created to hide the plant ducts. In fact, it is made, for a small part (mostly perimeter), of plasterboard sheets suspended from a grid of aluminum profiles which are in turn hooked to the roof slab by means of steel cables, and for the remaining part (the central surface of the rooms) by means of suspended panels in light MDF (thickness 15 mm ribbed) finished with the above serigraphs.

The separation between the two rooms, entrusted to the sequence of full and empty volumes already mentioned, is also made in part with the same technology: the long side of the volumes is finished with lacquered MDF paneling and treated with class 1 protective paints The short side, which establishes the perspective depth of the volumes, is made with a backlit opal panel. The backlighting system is of the photodynamic type, with control and programming of the light color temperature by means of specific software. 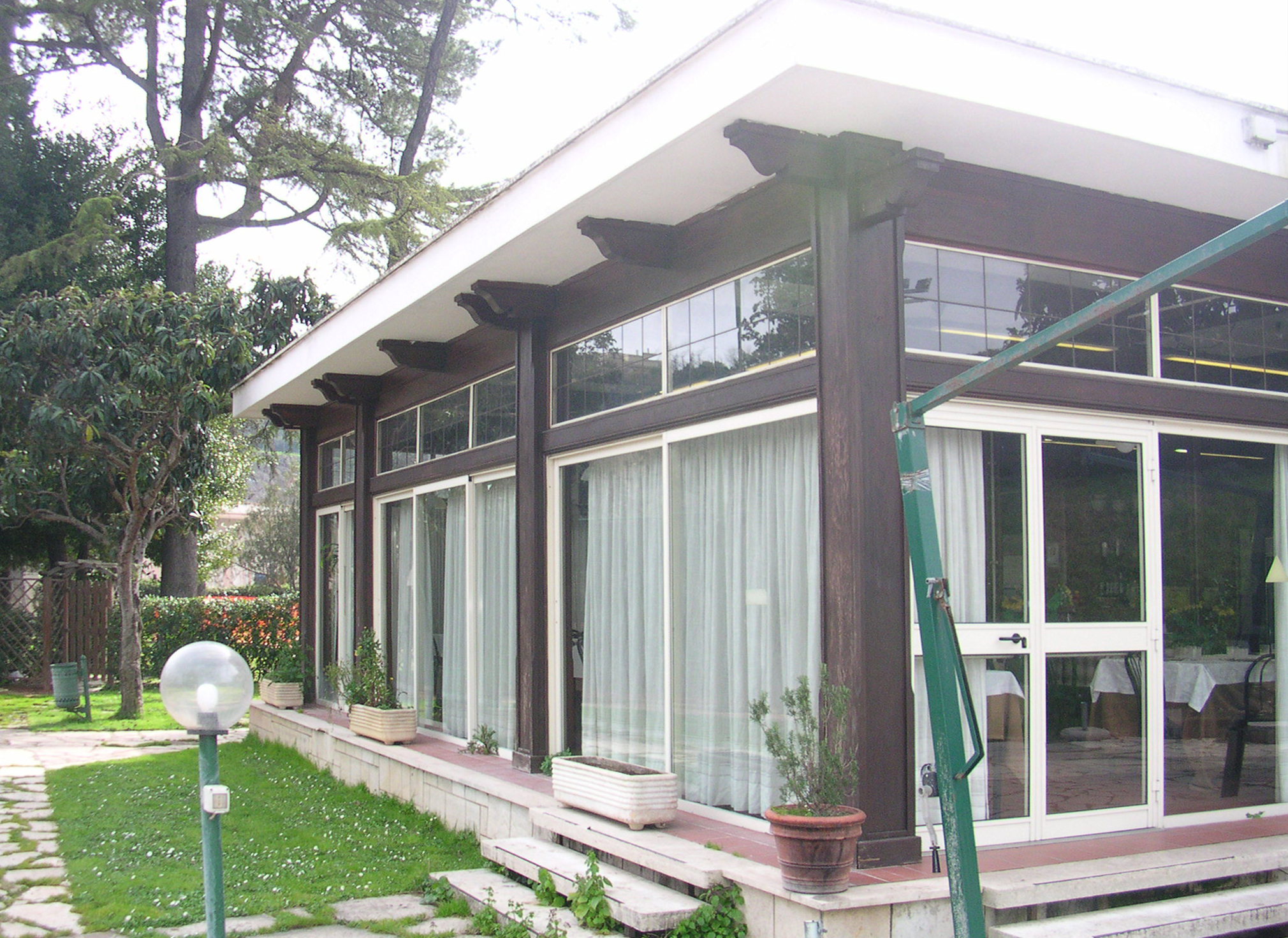 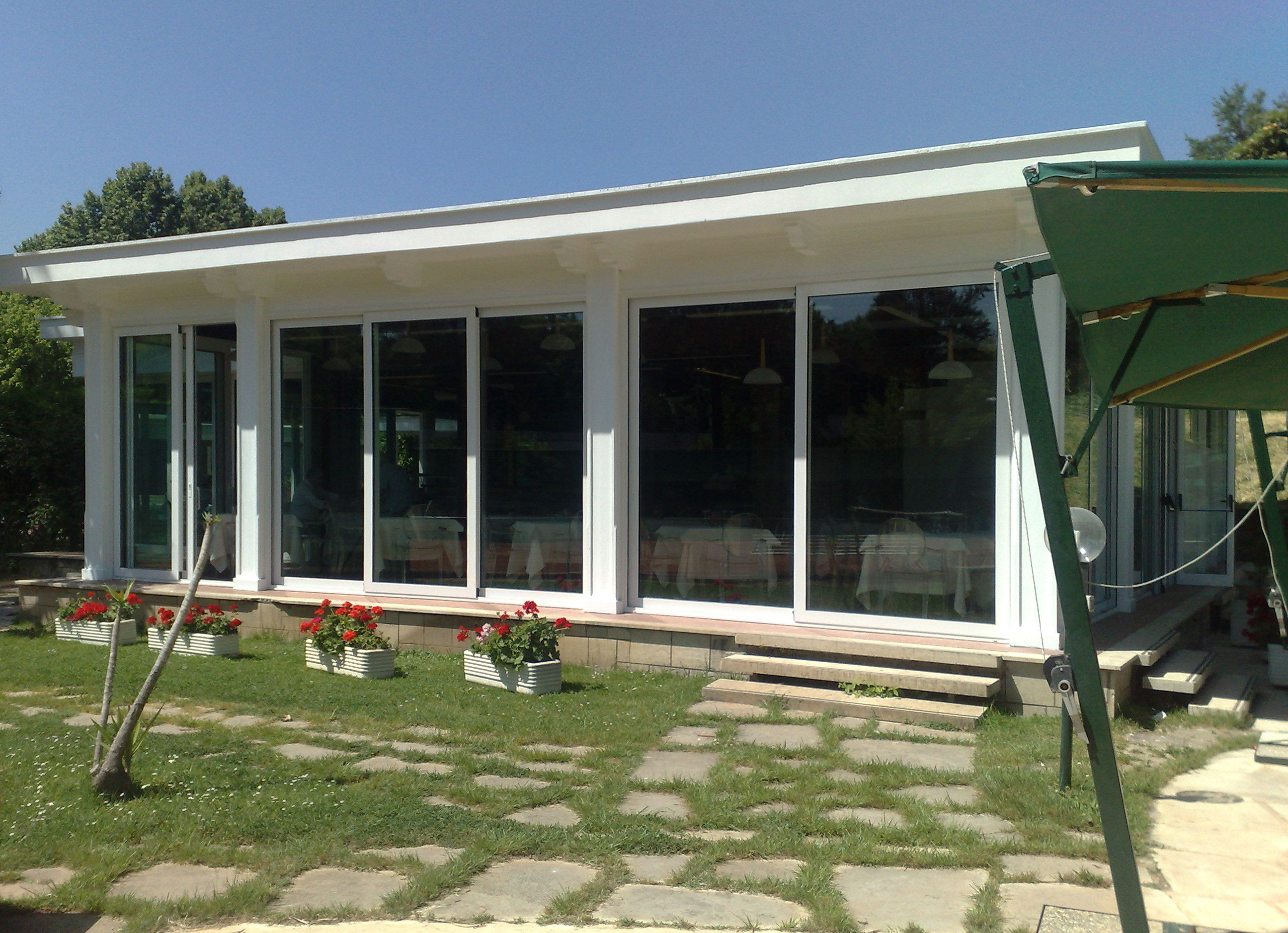 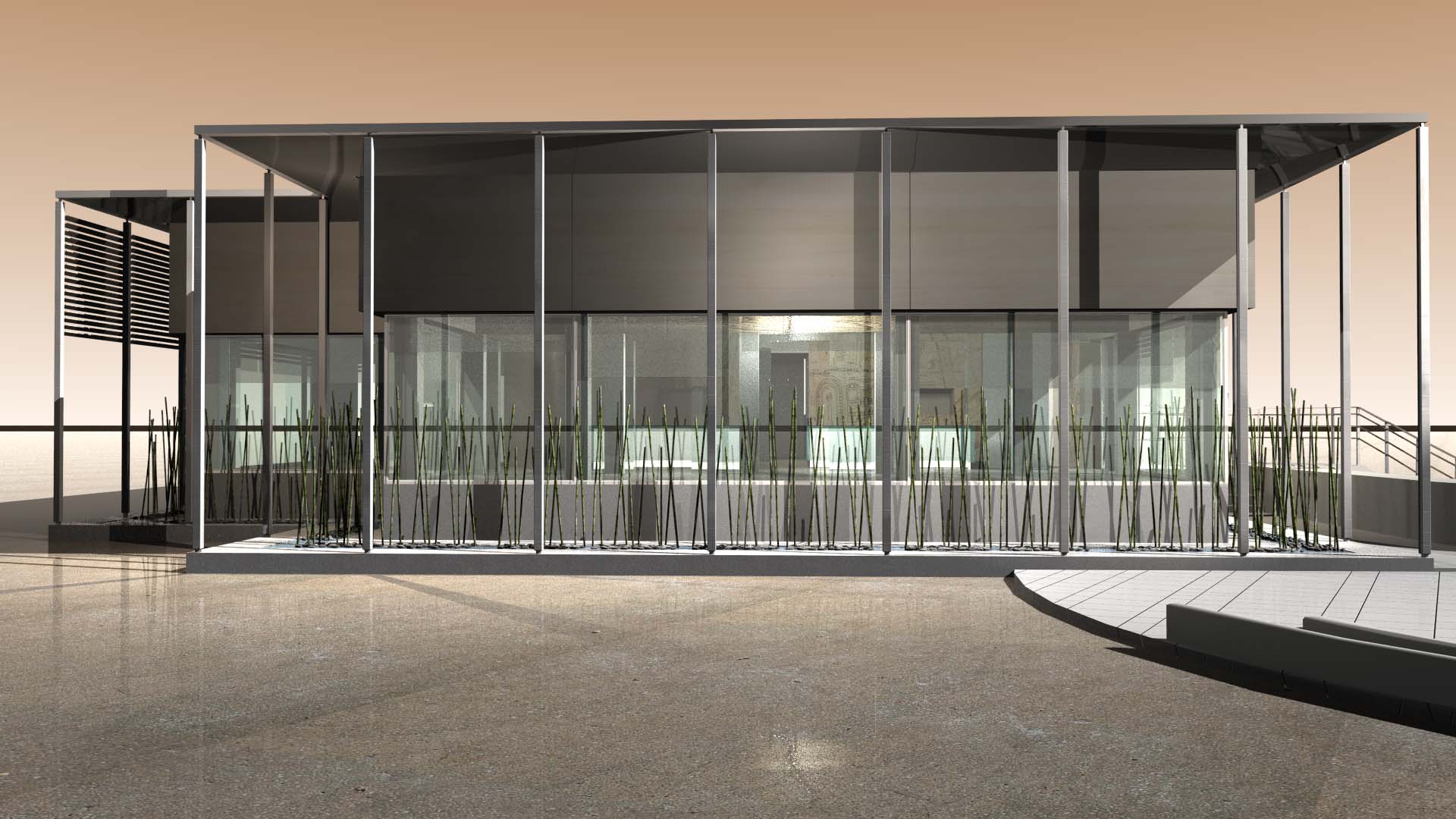 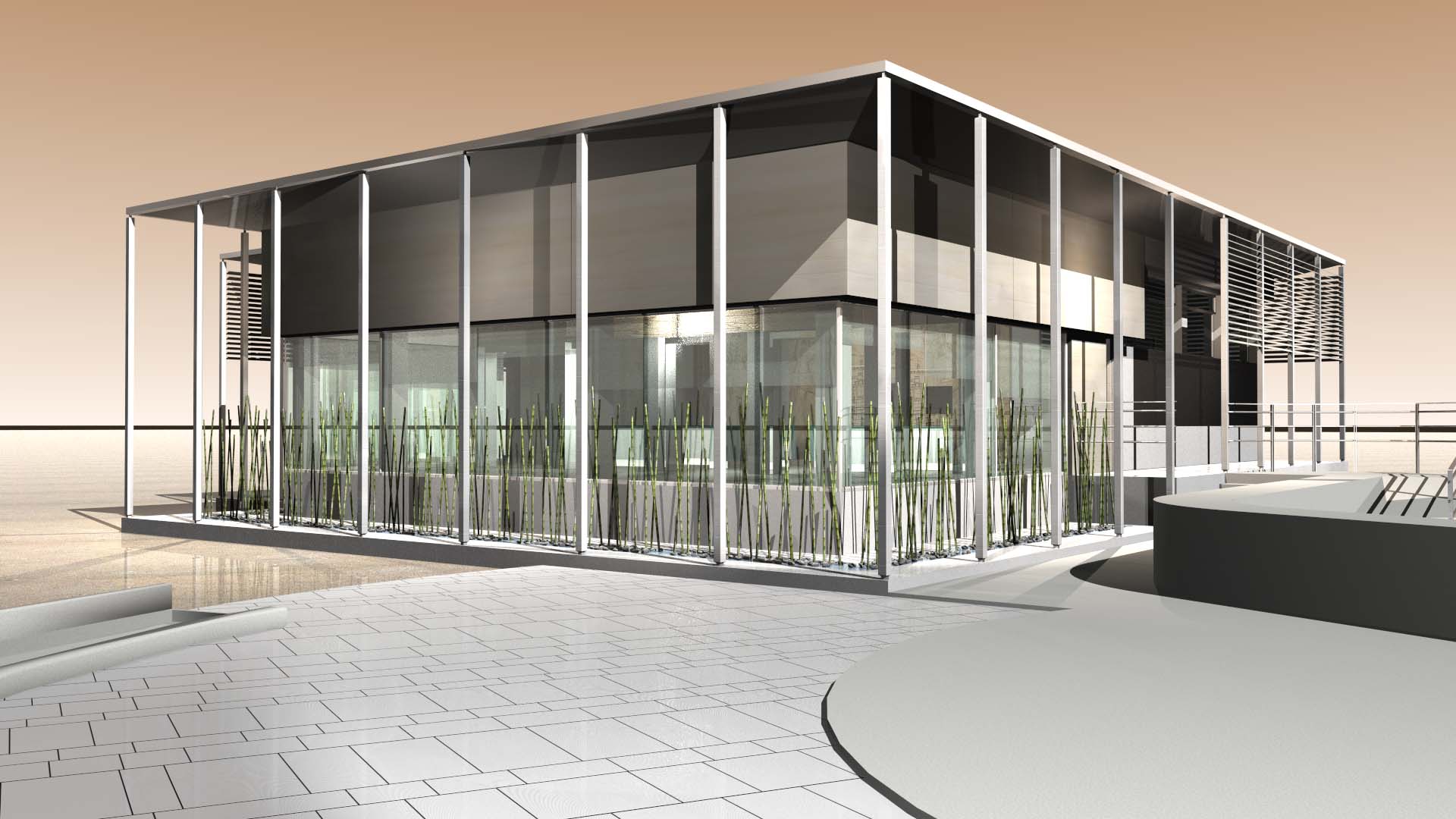 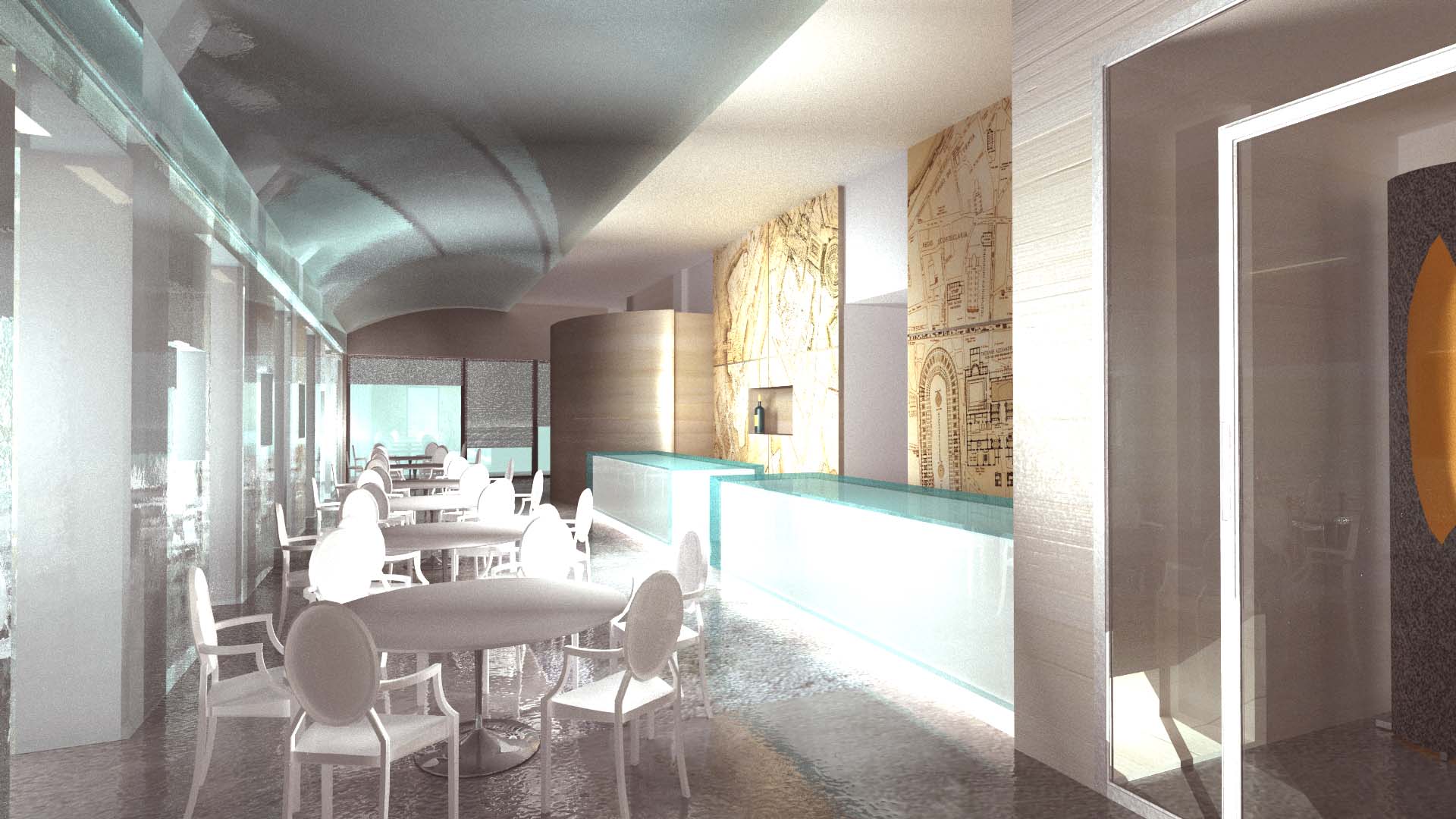 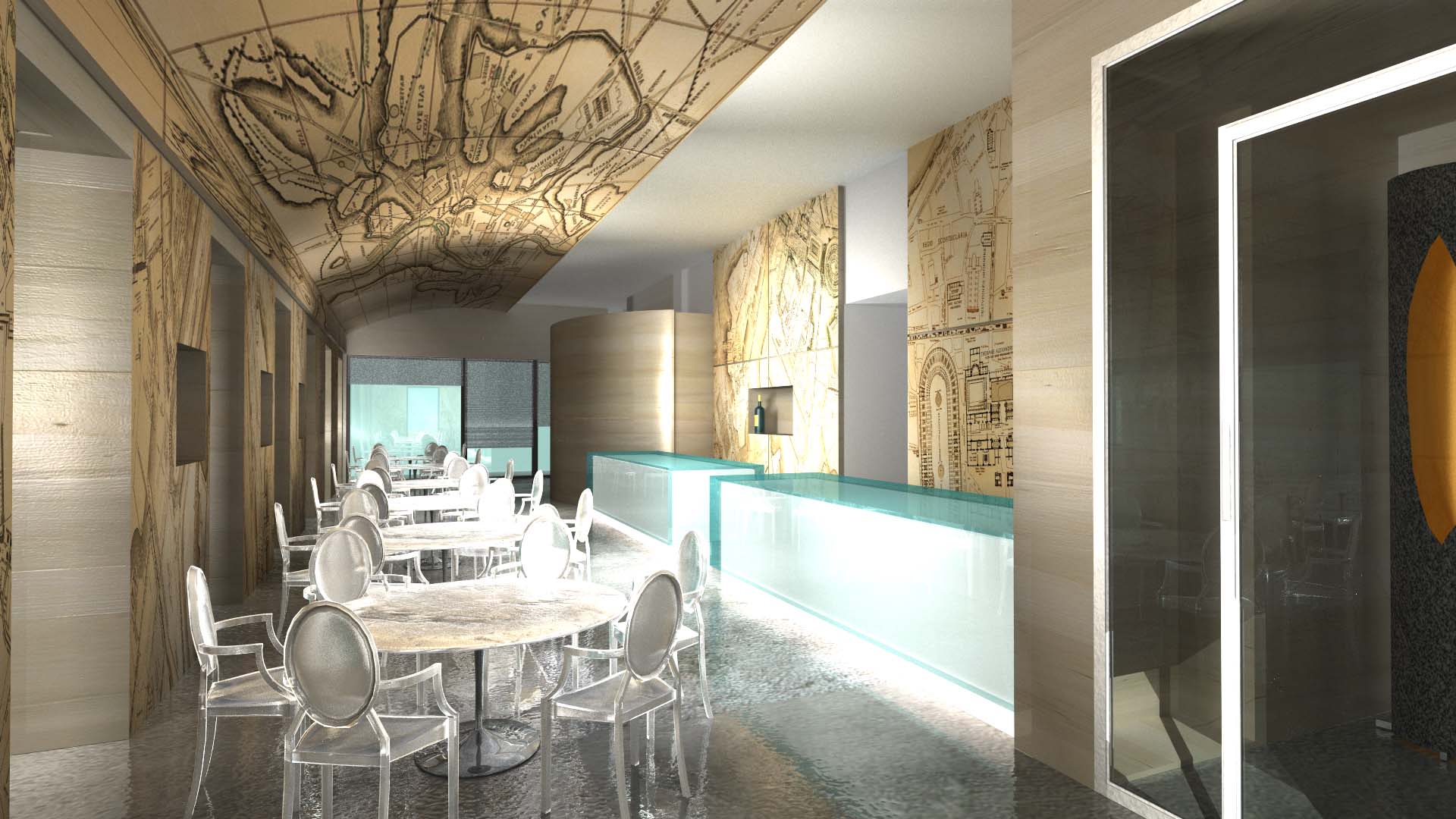 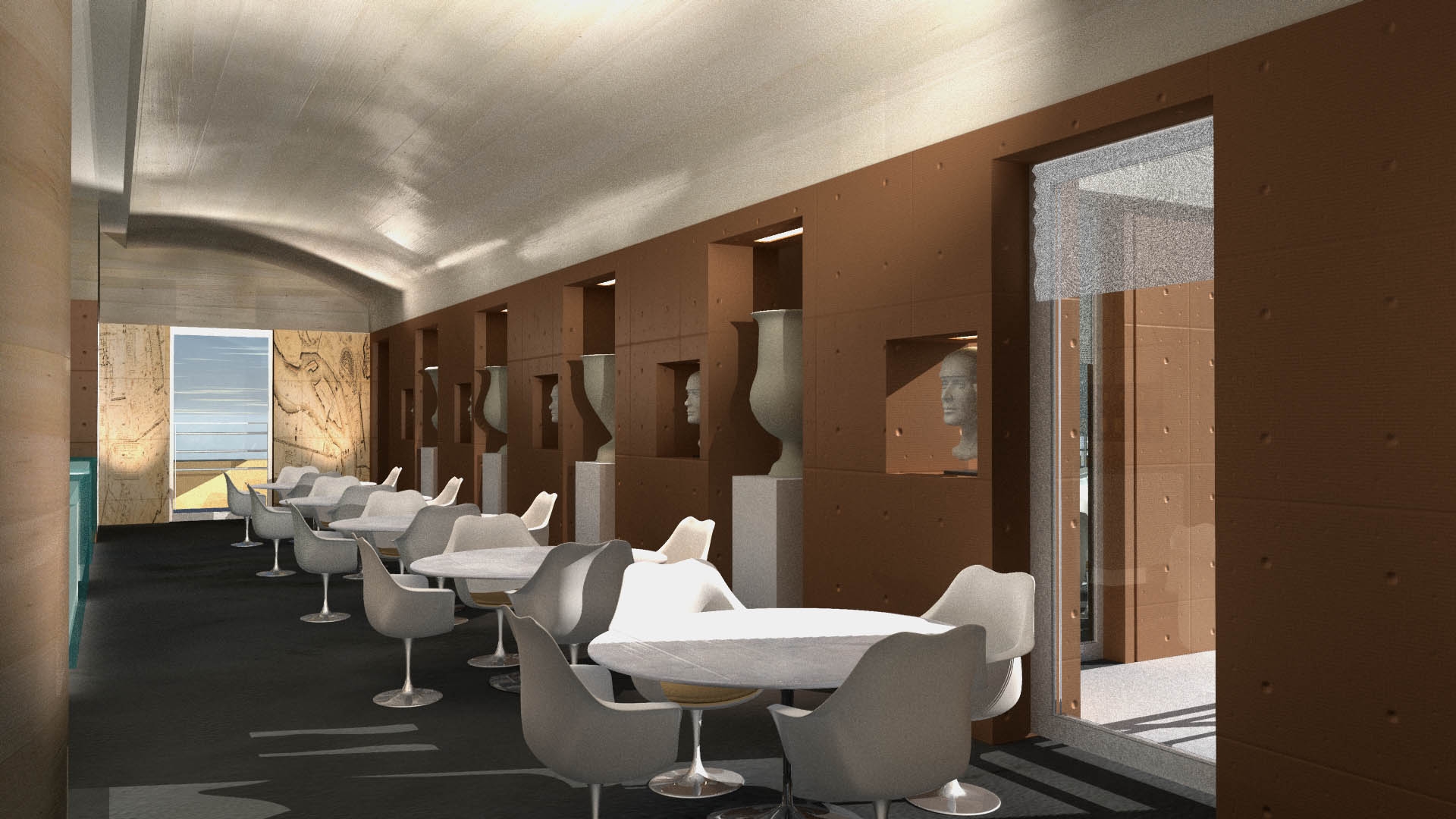