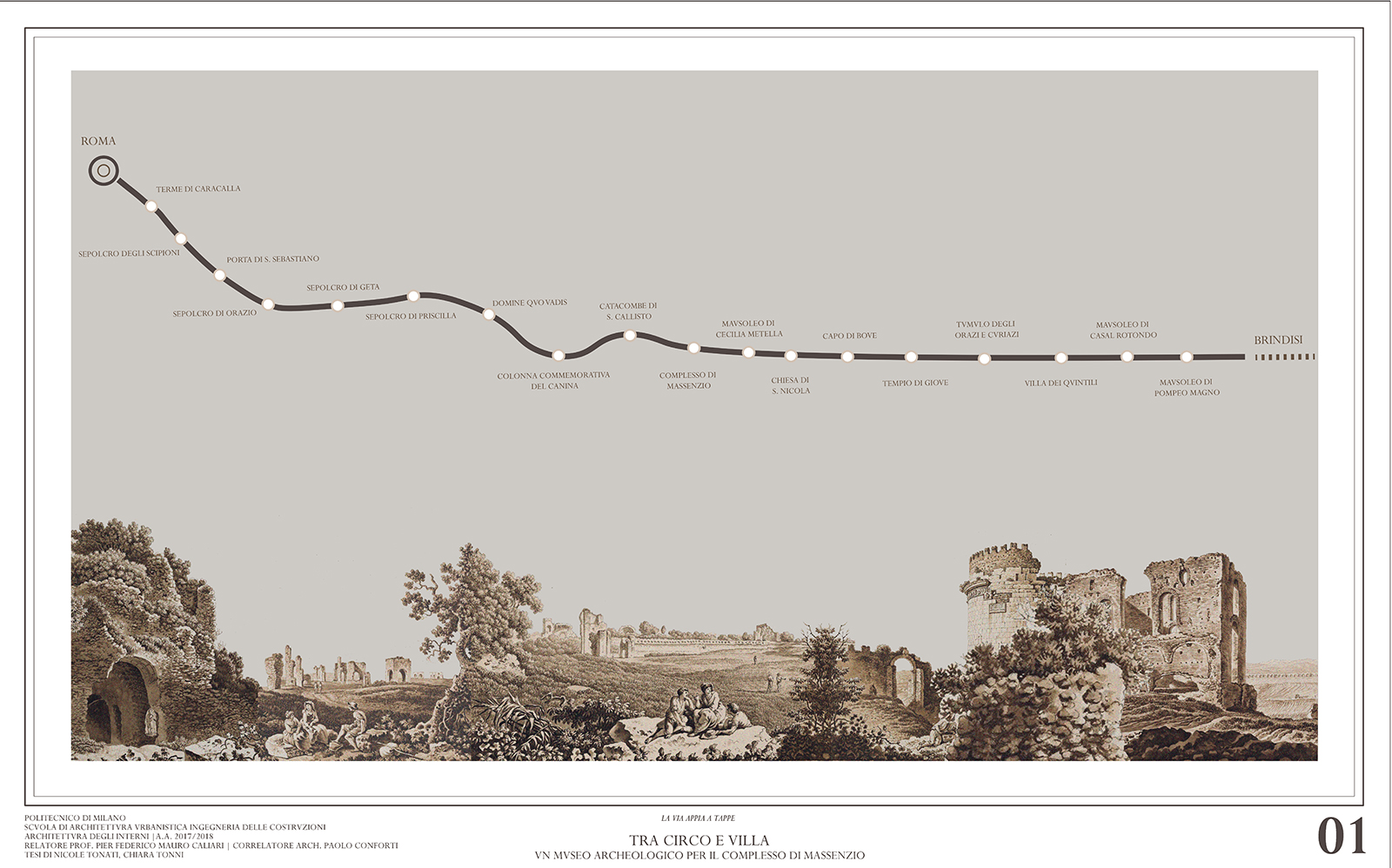 This Master’s degree thesis has the scope to develop the Complesso di Massenzio, located on the Via Appia Antica. Following the analyses performed on this area, emerges a clear caesura between the Regina Viarum and the Caffarella valley, to the east: the archaeological site, instead of linking, divides and interrupts the connections between the two areas. Particularly, the Appia Pignatelli, physical limit that encircle the site and graft itself on the old path of the Via Asinara, currently represents a true obstacle for the road conditions, especially for cyclists and pedestrians, in the section from Rome to the Via Appia Antica. Its configuration was Different in the past, when, starting from second century b.C, the site belonged to a wider system, with estates from the II to the III Miglio, the so-called Pago Triopio di Erode Attico, in which we find traces of the primitive plant of the suburban villa, on which the Palazzo Imperiale will be founded in the 4th century. The estate included, inside the present Parco della Caffarella, architectural elements such as temples, cisterns and graves, the well-known Ninfeo di Egeria and a prostyle temple sacred to Cerere and San Faustina, nowadays church of Sant’Urbano. The importance of the track of the Via Asinara, already documented in some Romanic cartographies, is reconfirmed by Massenzio. The design intent is therefore to reconnect, like it was the past, the Parco della Caffarella with the Via Appia Antica, transforming the Massenziano ensemble in a connecting element. The architectural intervention has a dual direction: on one hand, the outlined shapes define a new access to the northern limit of the archeological area, a museum with the archeological remains discovered near the spine of the Circus; on the other it was chosen, to confirm the role played by the imperial tribune, to enhance the articulation element that underlines the accomplished gesture, through an anastylosis and a reconstruction of the terraces in the corresponding tribune. The profile of the new museum result from a rollover operation of the traces of the ancient villa, compared to the majestic Pulvinar Imperiale, unique element which is physical and visual contact between the Villa and the Circus. At the same time, the decision to connect to the rear wall of the stadium, integrating the proportions of the building to the one of the circus, particularly to the elements of the spine. Doing so, the site can be entirely benefited in a free way, and the access can be done from different strategical points, assuming the role of a real filtering space, reinforcing the archeological remains, without depriving them of the importance they deserve. 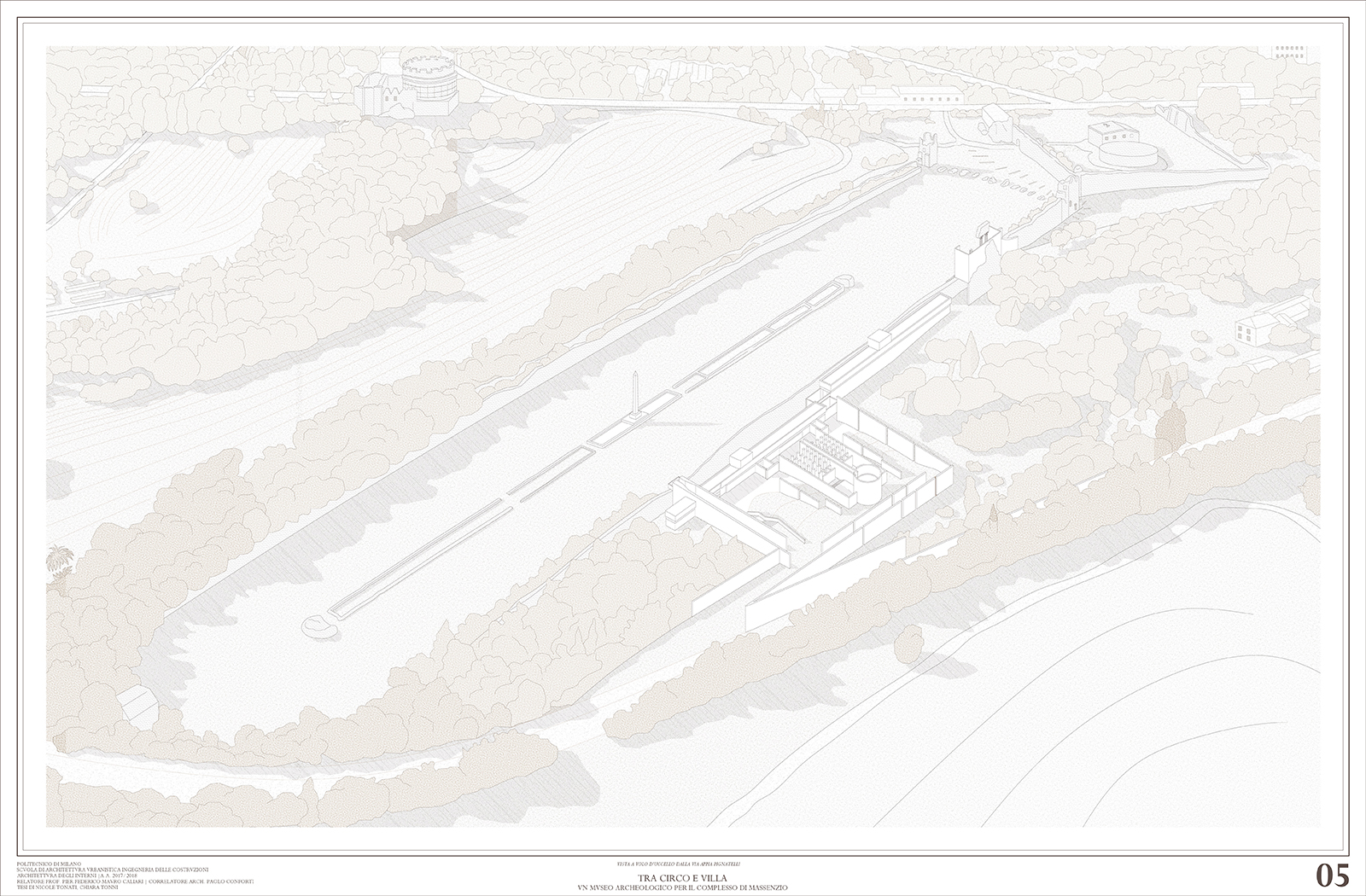 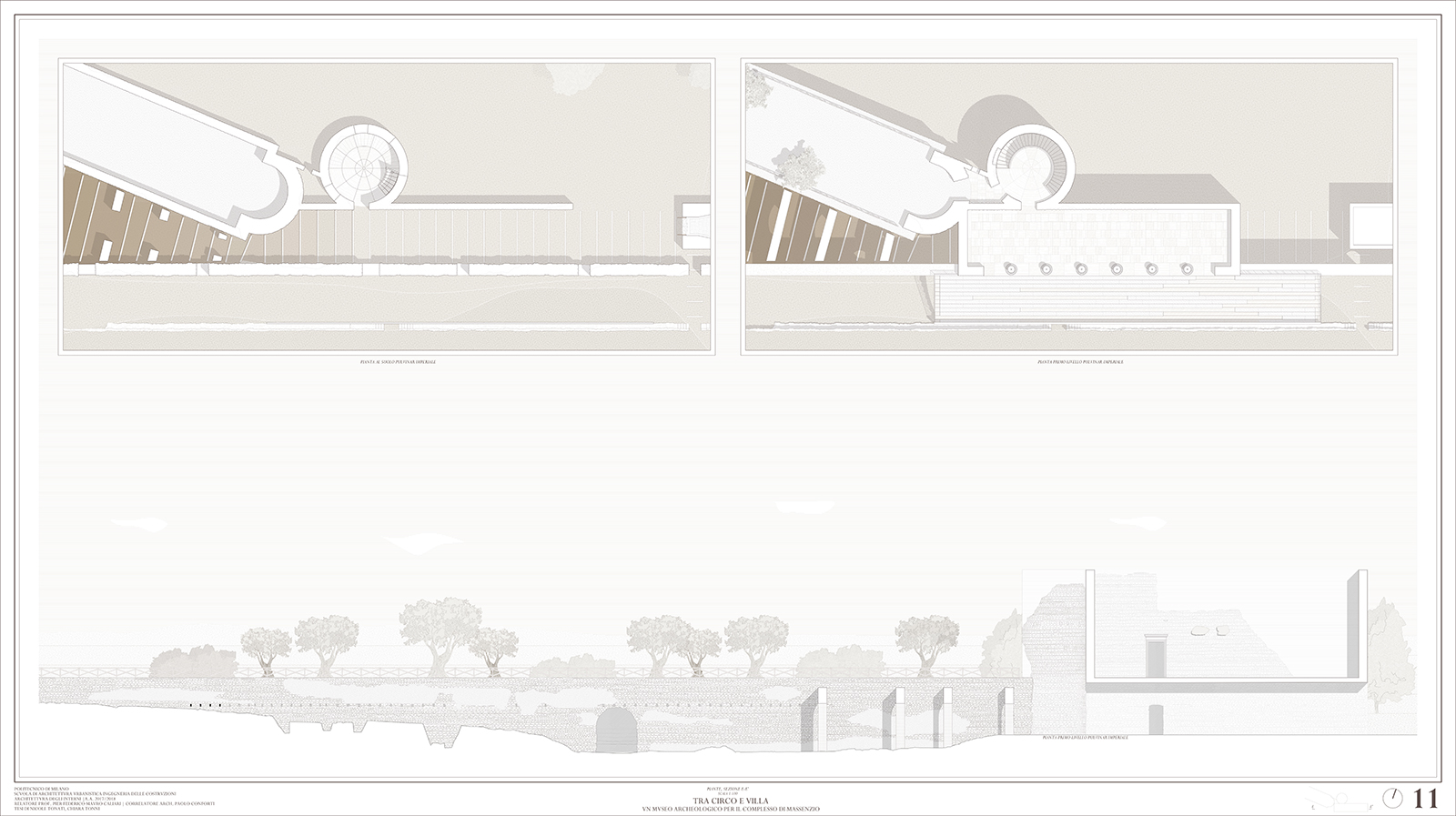 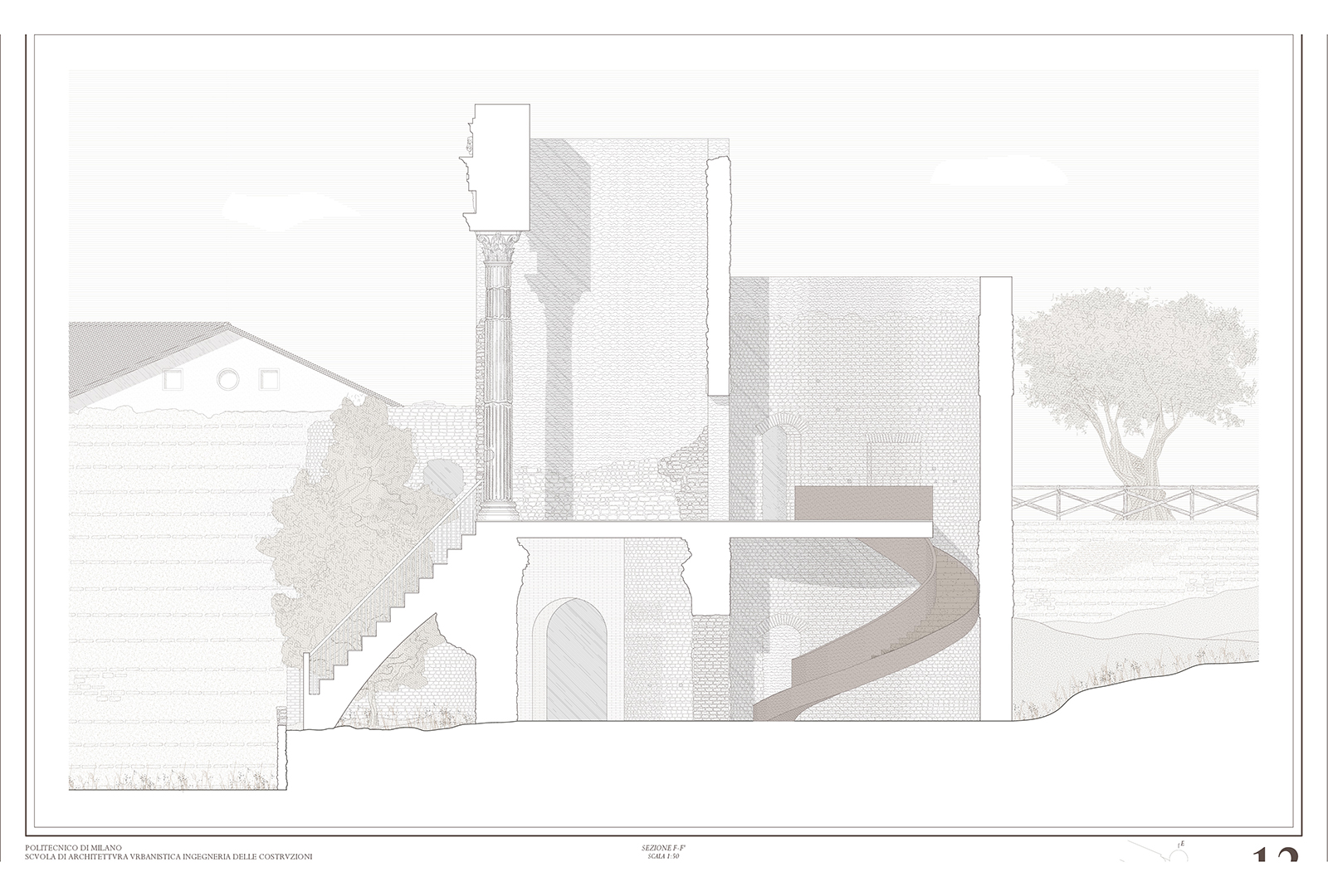 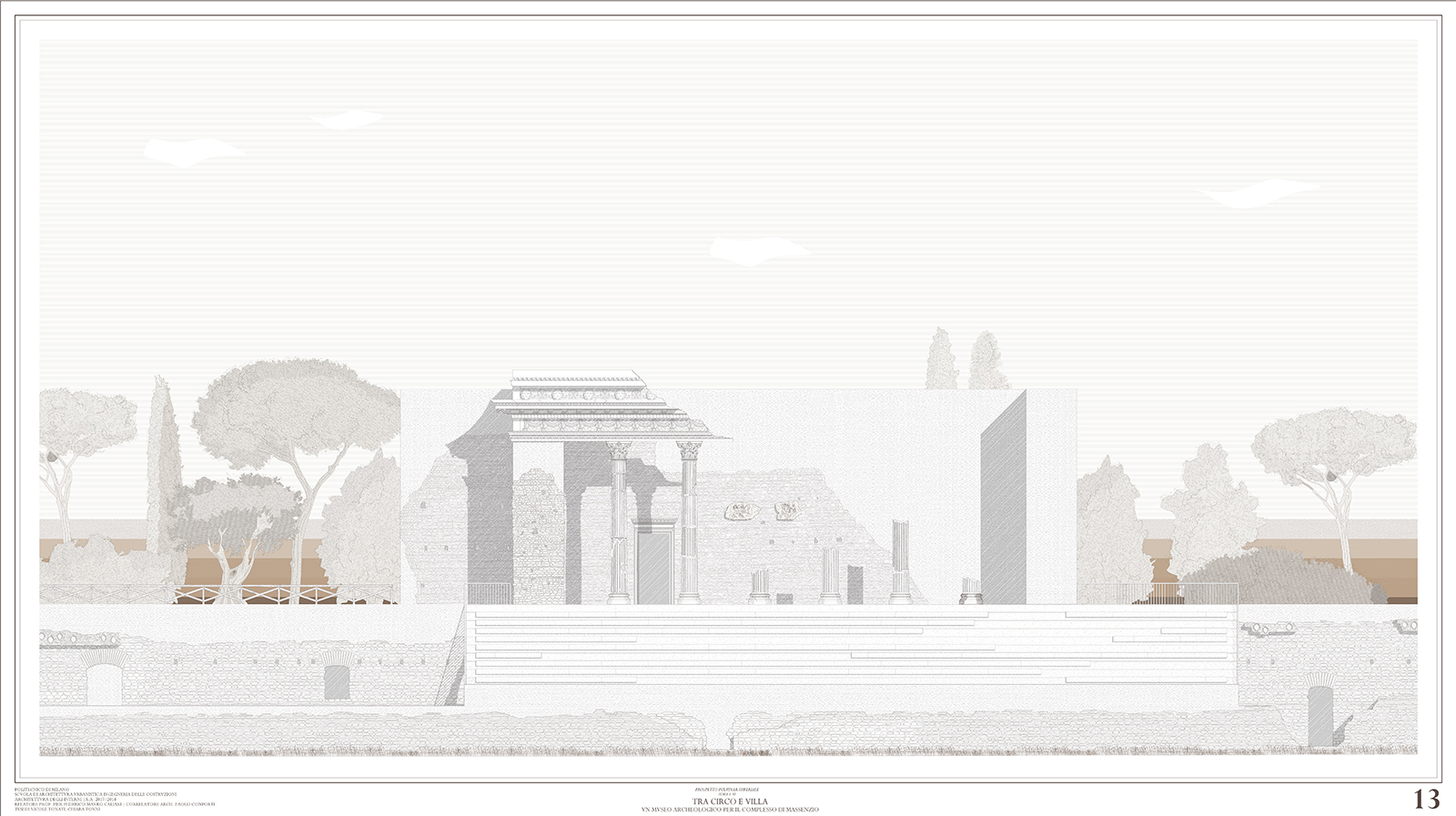